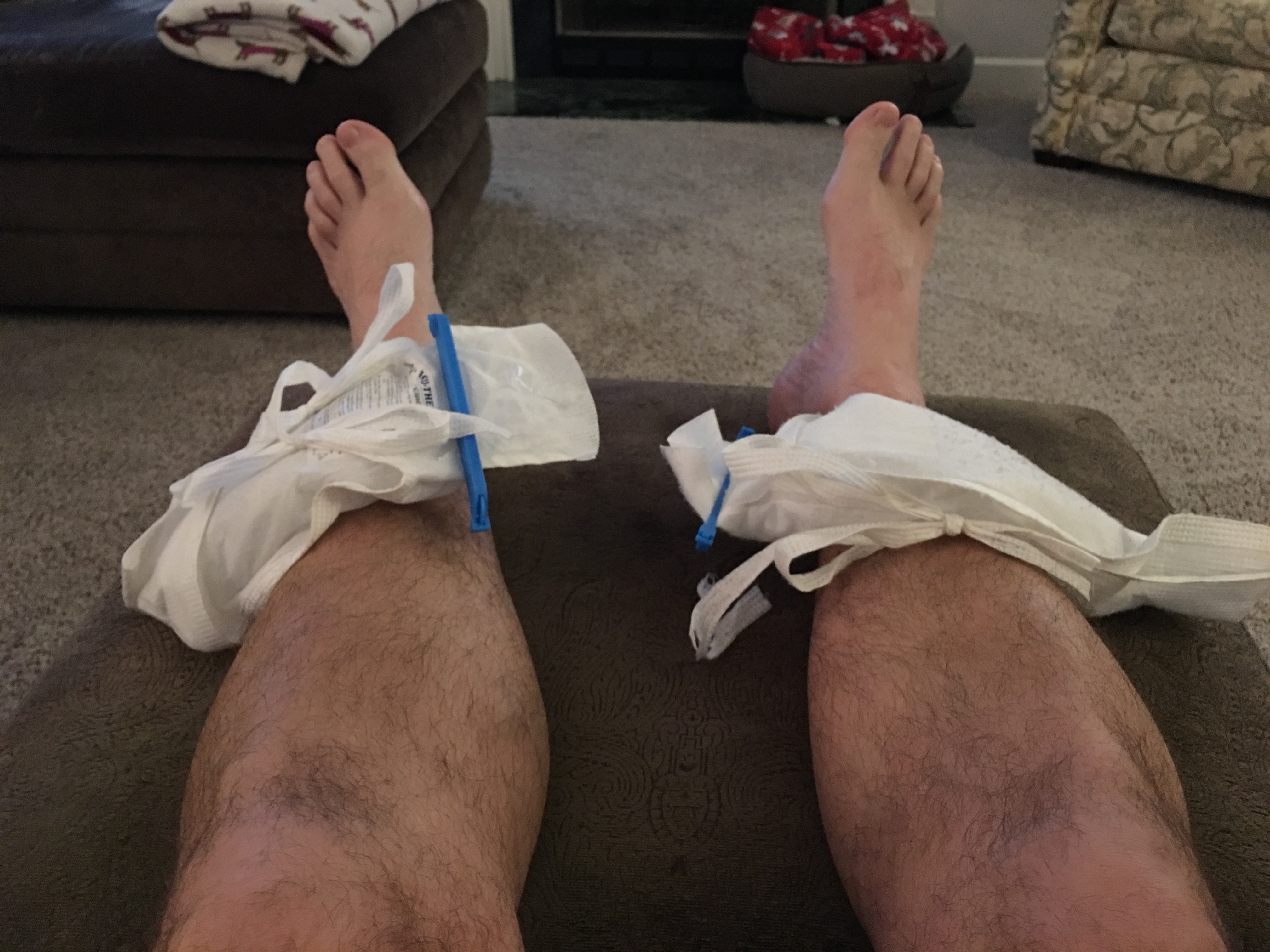 After a couple of weeks of healing, lightening, and getting wiser, I’m ready to hit the trail and complete Segment 1A of the Mountains-to-Sea Trail.

So what did I learn? And what am I doing differently?

Well, I learned that I’m old and slow… and that day hikes, no matter how strenuous, aren’t sufficient prep for several days in the mountains with 35-40 pounds on your back.

Descending almost 4000 feet on the first day, and 3000 feet on the third day, utterly wrecked my shins. My left shin recovered in a few days. My right shin took almost two weeks.  You just don’t use your dorsiflexors that way in normal life. It’s like going to the gym and working out a new muscle you’ve never used before. With 275 pounds of weight. And 20,000 reps. I’m hopeful my dorsiflexors will be much stronger and better conditioned now. But I also don’t have anything remotely like those descents in the next section of the hike. I think they’ll be OK. I’m going to be super-attentive to my shins, regardless. Short, slow, deliberate steps on the downhill sections, even when they don’t hurt (yet).

I think my foot strike had something to do with it, too. I have high arches for a heavy guy, and I normally supinate (foot rolls out) a bit when I walk. But with the heavy pack and boots on the trail, I was pronating… a lot. I was using the Dr. Scholl’s “Custom Fit” orthotics in my Keen Durand boots, on top of the factory Keen insoles. This combo had worked great for me for hundreds of miles of day hiking, with zero foot or leg issues. But it wasn’t enough support with the heavy pack. My feet weren’t very stable in the boots, and were rolling inward, a lot. I noticed this on the trail, and actually fashioned a makeshift arch support for my left boot on day two. And my boots were half-a-size too small for walking downhill with the pack… ran out of toe room and that didn’t help things.

I took my size 10.5 boots back to REI (I had sizes 10.5 and 11) and traded up to an 11.5. Then I went to Foot Solutions and got fitted for some rigid arch supports (that go under the padded insole) and added Dr. Scholl’s “Work” gel insoles on top of these (instead of the Keen insoles). I could immediately feel a huge improvement in stability with this setup, but it’s taken a few hikes to get used to it. I think this will help a ton. I don’t think I really need custom orthotics at this point, but we’ll see. 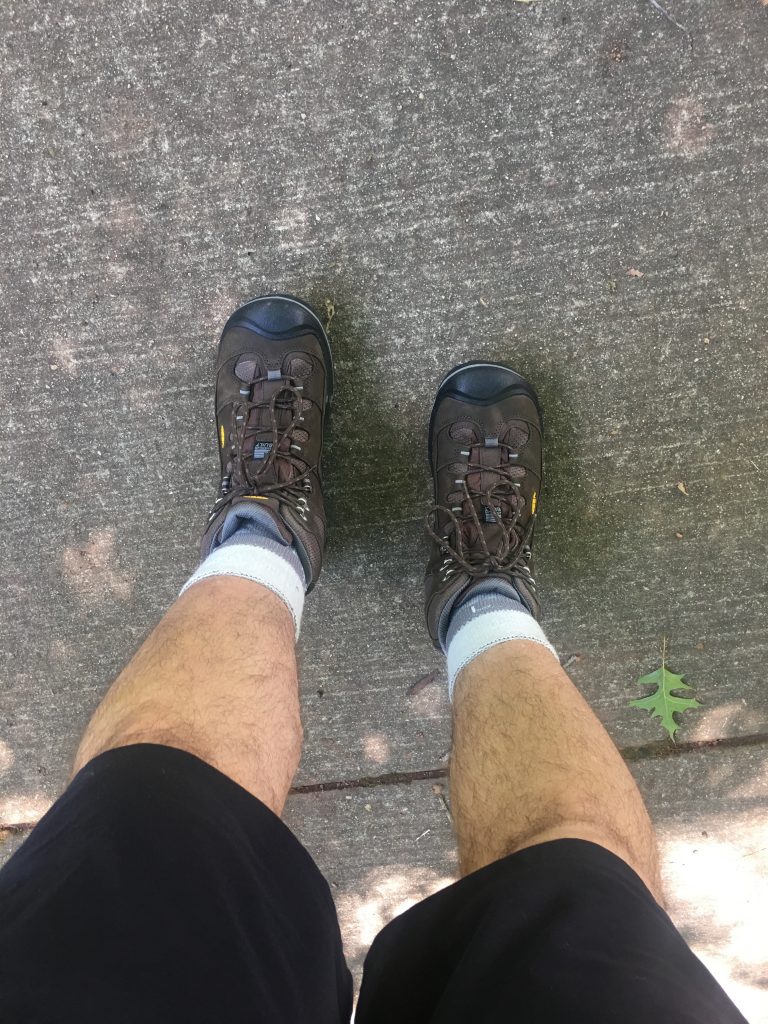 I confirmed that I set insane goals for myself. While my daily mileage goals seemed pretty conservative when I was planning, that plan (like most) didn’t survive first contact with reality. My pace on the trail was a fraction of what I expected, and what I normally do on day hikes. I normally average 2mph on day hikes, including breaks. I averaged 1mph the first two days, and about .75mph creeping down the descent with bad shins on day three. So a 13 mile goal for day one was just nuts. It doesn’t matter that fastpackers do 40 miles a day. I’m not going to, ever.

So for this leg of Segment 1A, I’m planning to take as much time for 45 miles as I had planned for 70 miles last time… 6 days. I’m only doing about 4 miles on day one (all climbing). This will give me time to travel to the start that day, also. Only about 7 miles on day two (with moderate climbing and descent).  About 11 miles on day three, and about 7-8 each for days four, five and six. Most of those days have relatively little vertical… it’s mostly along a ridge at ~5000ft. 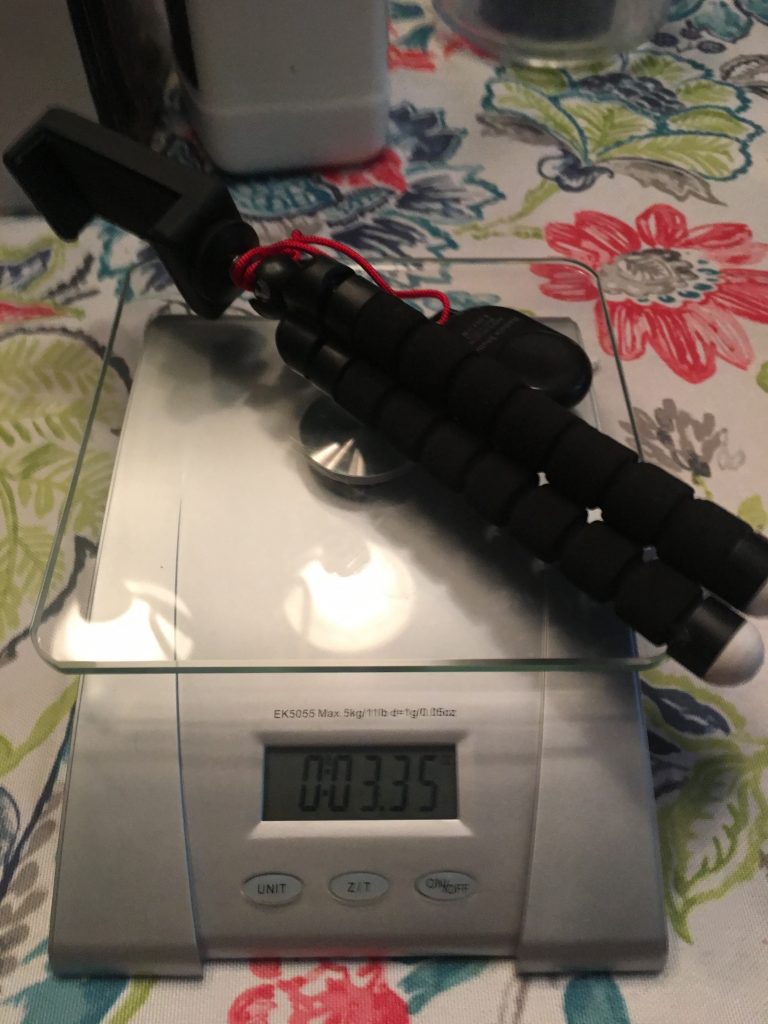 I learned that weight matters. A lot. I really don’t want to carry 40 pounds again. The pack really didn’t feel super heavy for the first couple of days. But by day three… it felt heavy. My base weight last time was almost exactly 25 pounds, plus 15 pounds of food and water (with a full 3L bladder). I really scrutinized what I took, found several things I could remove, found some other things I could lighten, and am down to about 23 pounds base weight, after actually adding a few new items (like warmer fall clothing and a mini-tripod for the iPhone, and better hammock insulation, and a pillow). I’m also shedding about a pound of food (I just don’t need quite so much), and will typically be able to carry less water because it’s abundant on this leg of the hike. So my total pack weight is around 36 pounds. Four pounds doesn’t sound like a lot… but it is. Trust me. 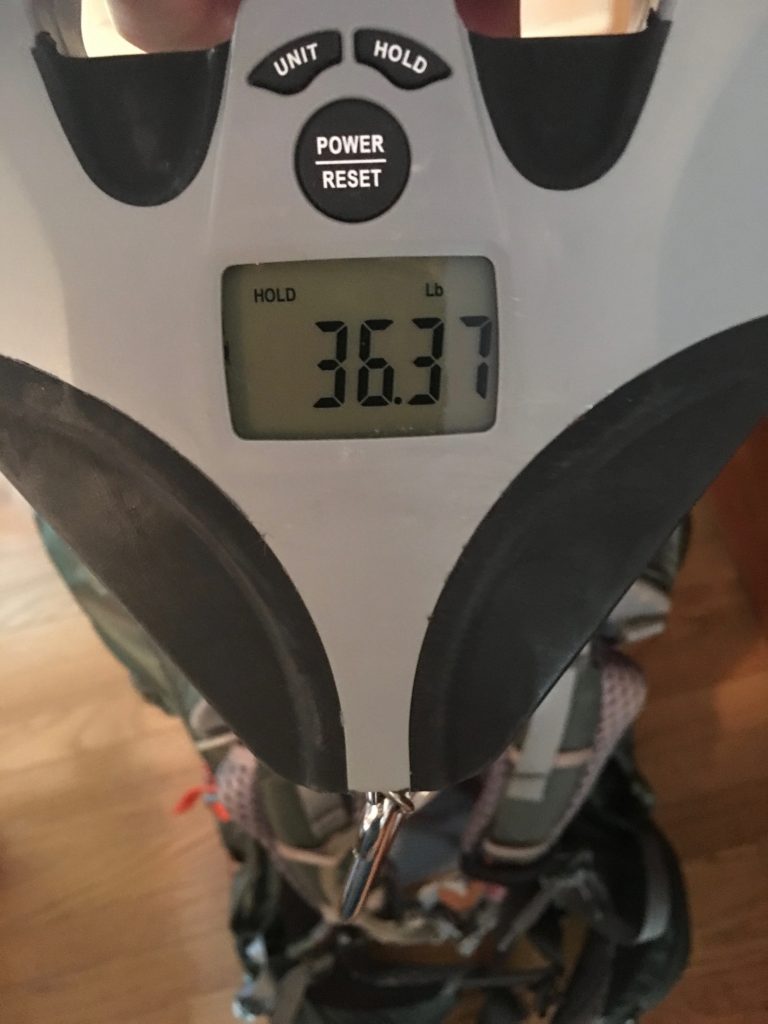 I learned that you really do need to re-think what is a “need” vs. what is a “luxury” vs. what is “extraneous.” I can live without three pairs of hiking socks. I can live without an extra hiking shirt. I can do without a 1oz stabilizer for my Jetboil stove. I can usually do without “good” rain gear. I love my Marmot ultra-light raincoat and my rain kilt, and they worked very well, and are relatively light. But they weight 11oz total. A 1oz emergency poncho will suffice if I’m only going to see one or two brief showers the whole trip. So I’ll only carry the raingear if the forecast is for a LOT of rain, or if I need the jacket for warmth (over my fleece).

I learned that all that stuff people tell you about hammocks being cold, is true. Especially when you’re hanging on top of a ridge at 5000 feet, with a nice breeze. I’ve tested four different approaches to hammock insulation in the past two weeks, and have settled on a 1/4″ closed cell foam pad for this trip. It should be plenty warm for the forecasted weather, and only weighs 8oz (about the same as the Insulbrite material I took last time). I added my 4oz air pillow… a real luxury, but I think it will help me sleep much better in the hammock. 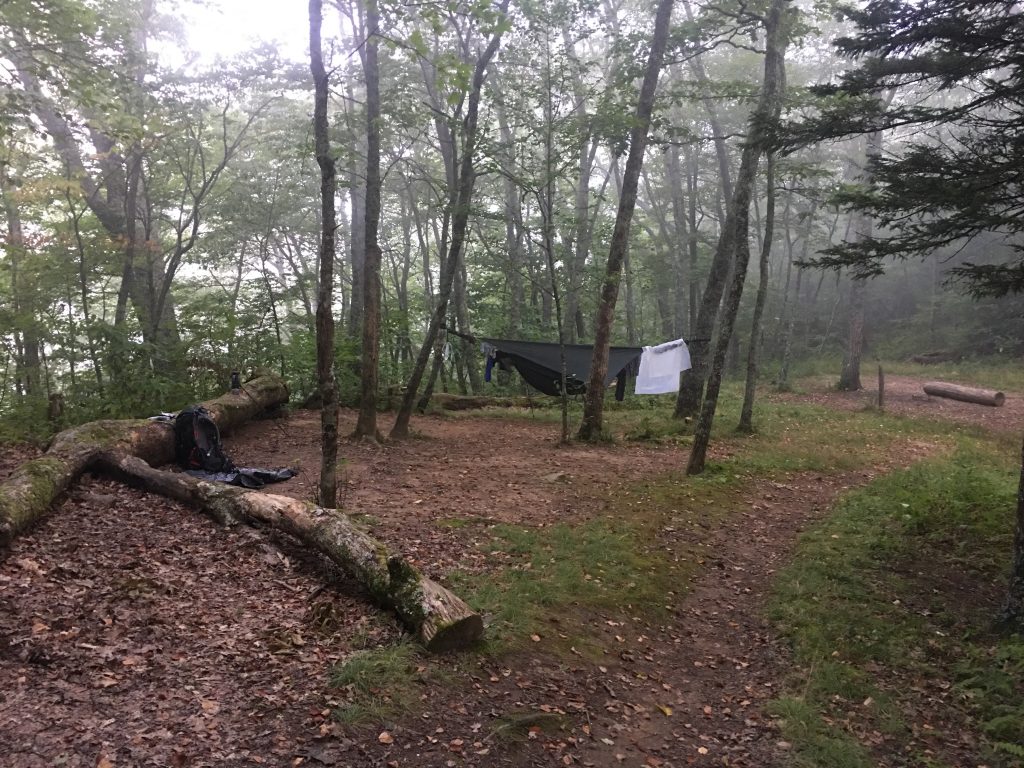 I learned that when you hang up your damp clothing on a mountain, and it gets down to the dew point overnight, your clothing will no longer be damp. It will be WET. Even if you hung it up under your tarp. If it’s foggy, don’t expect it to dry. So don’t do that. Hang it for a while before bedtime, before it gets cooler and more humid. Put it in a plastic bag overnight. Yes, it will be damp and cold in the morning. It’ll warm up once you start moving. And would be wet again anyway, as soon as you start sweating. Sure, I guess I could build a fire and hang my clothes near that… but I was too tired and unmotivated to ever build a fire. I’ll still take my fire kit, just in case. But I cut the weight of my fire kit from 4oz to 2oz. 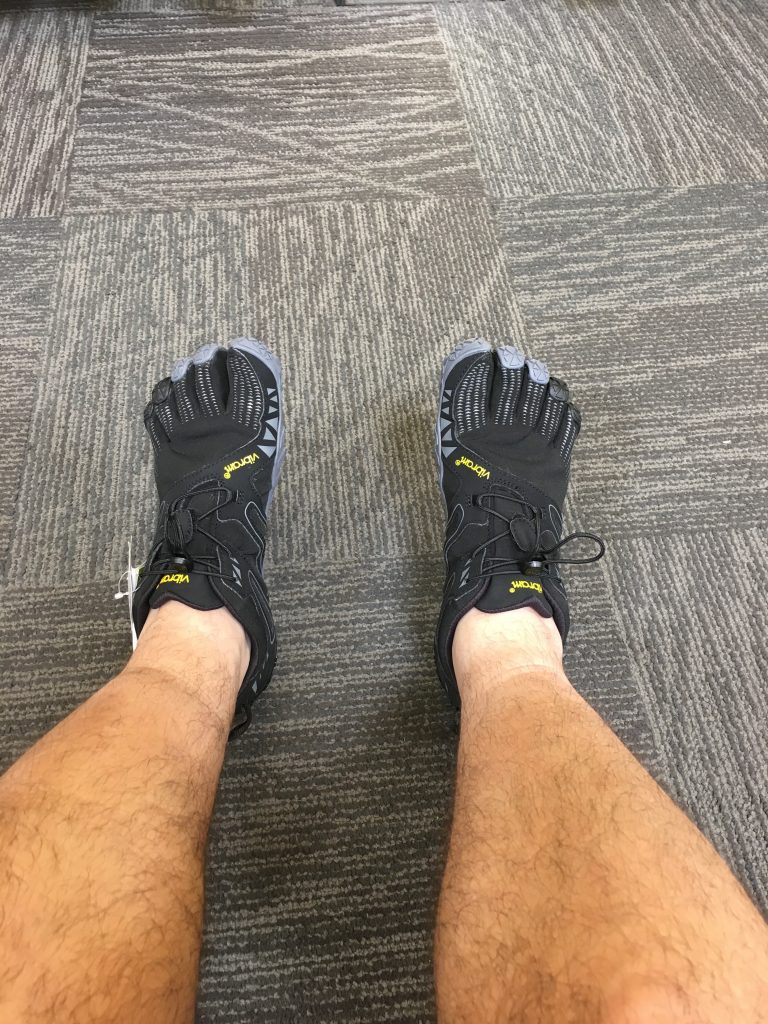 I learned that it’s really good to have alternative footwear. I had a pair of $12 “OP” brand water shoes from Walmart. I expected to wear them as camp shoes, and maybe for an occasional water crossing. I ended up wearing them for about 3 miles on a section of trail with many water crossings, and another mile on day three, after I emerged from the trailhead and my feet could no longer endure the boots. They worked pretty well, but I realized these shouldn’t be just an afterthought… that they are an important piece of gear. So I researched, and bought a pair of Vibram V-Trail FiveFingers. They should work great for camp shoes, water crossings, and light trail shoes, and weigh a couple ounces less than my old Walmart shoes. I can wear them on smooth trail segments to give my feet and legs a rest; they use different muscles than the boots, and they’re a couple pounds lighter.

I learned that current, high-resolution topo maps are your friend. I downloaded GaiaGPS and their topo map before I started, and it was a godsend. I actually had two other GPS apps with offline maps (AllTrails and Hiking Project). But Gaia was fantastic for finding water. The MST trail guide provides guidance on water sources, but it’s incomplete. While some sources shown on the topo are seasonal, and could be dry during drought periods, you can take a good guess at this based on how far the source is from the trail, and what the weather has been like recently.

I learned that the InReach satellite communicator is a very handy device. It helped me keep my sanity to post updates along the way, it helped my wife keep her sanity by knowing I was OK, it was fun to see my friends’ comments on Facebook when I got back online, and it was invaluable for updating my wife on my changing schedule, and having her secure campsites based on the new plan. And it was just nice to be able to text my wife and interact with another human when things were tough. I learned that 40 messages sounds like a lot… but isn’t. I used about 140 in four days. So I’ll pay for the unlimited plan when I’m hiking, from now on. 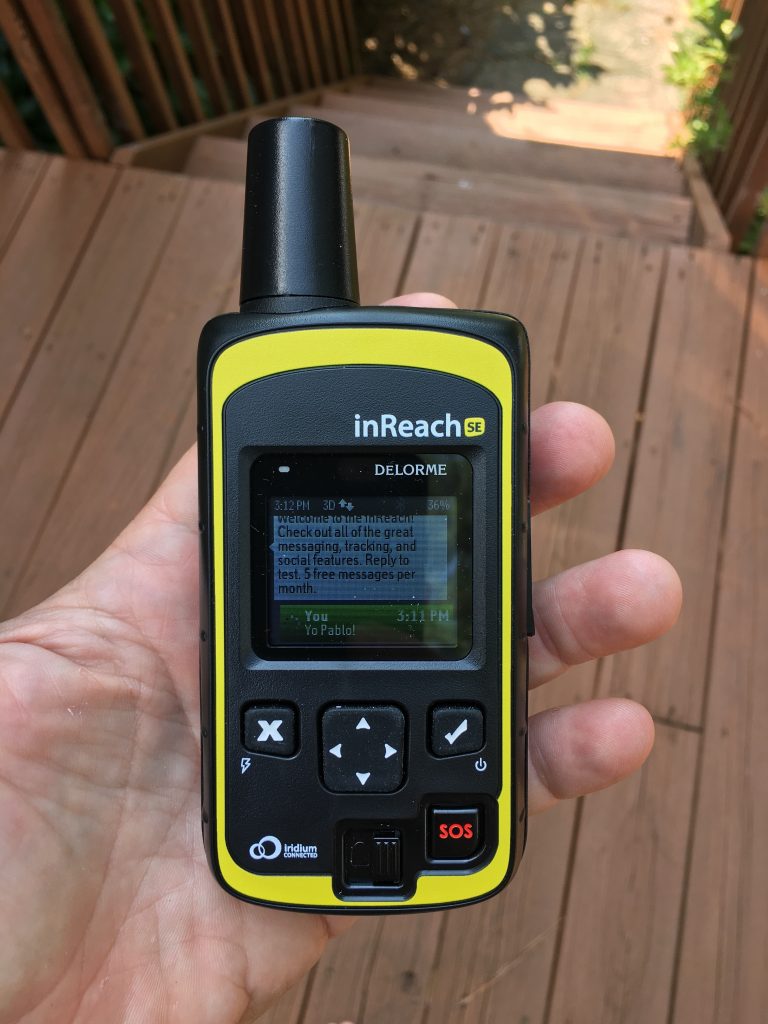 The remnants of Hurricane Irma blew through a couple days ago, and I’m waiting to see if they can get the Blue Ridge Parkway and Balsam Mountain campground reopened before Friday… if they do, I’m going hiking. Hell, I might go hiking even if they don’t; I’ll find a way. I suspect I’ll have to climb over a few downed trees along the way. But that adds to the adventure, I guess.