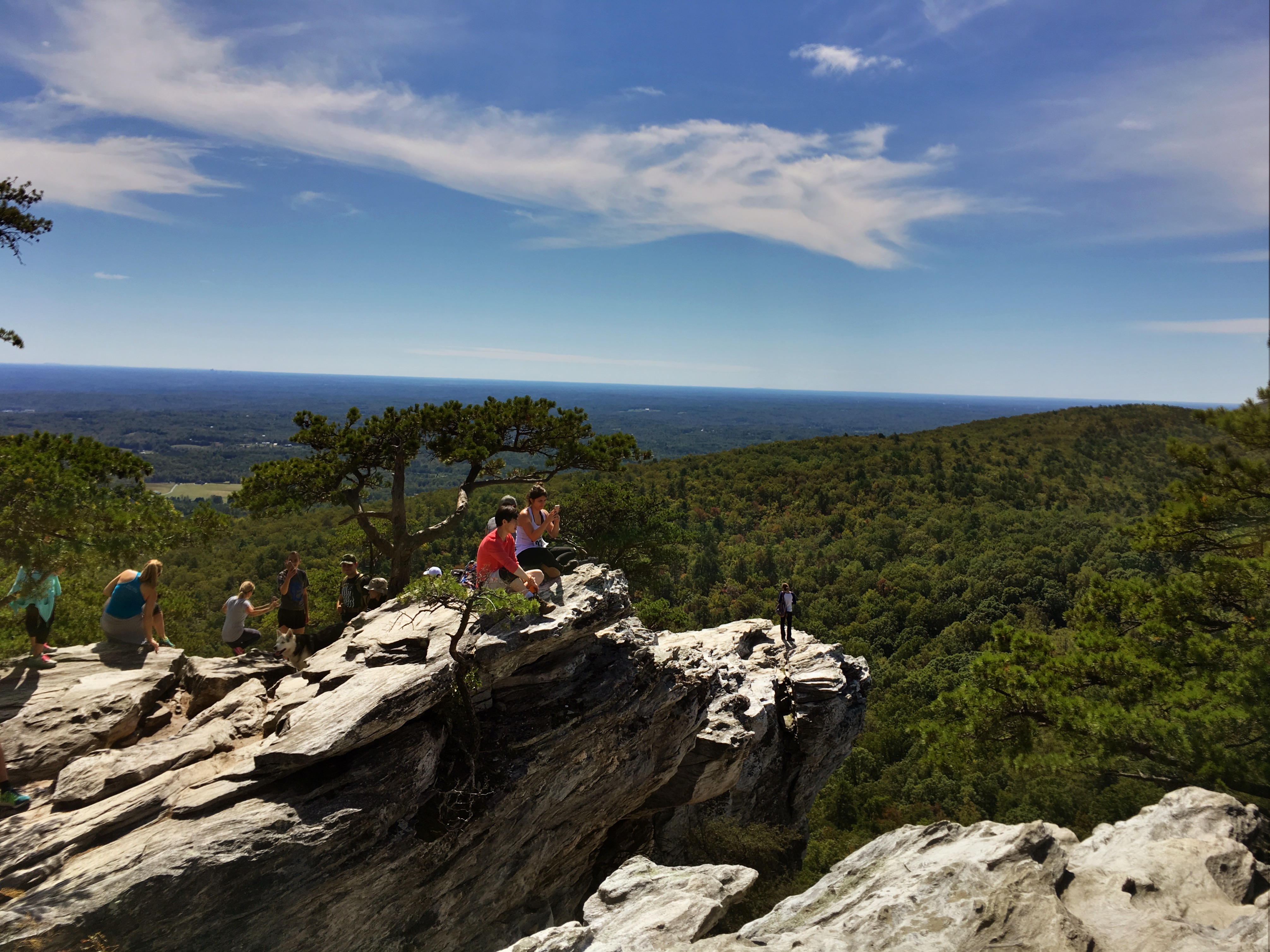 Reach the Peaks is an annual trail run and hiking challenge, organized by the Friends of the Sauratown Mountains and the Stokes County Arts Council. The course covers ten miles of the most challenging trails in the park, and visits five “peaks” along the route. My brother-in-law, Mike, is an avid trail runner. This looked like a fun event, and we decided to give it a try: Mike running, and me hiking. We were not disappointed!

Hanging Rock State Park is in the northern Piedmont of North Carolina, near the small town of Danbury. This park, along with Pilot Mountain State Park, are in the Sauratown Mountain Range, a small, isolated group of mountains rising sharply above the surrounding piedmont plateau.

The park is a little over two hours from our homes in Holly Springs, NC. So we had to rise EARLY to make the event; I picked Mike up at 5AM, and we arrived a bit before 7:30AM with a quick stop for breakfast. We had pre-registered for Reach the Peaks several weeks earlier, to ensure we made it in below the registration cap, and to get all the pre-registration swag! The pre-registration process was just fine, as was communications leading up to the event. We quickly checked-in upon arrival, and were ready to go. It was in the 50’s and high temps would be in the low 70’s, with no rain and low humidity – a perfect day.

The Sauratown Mountains rise about 1,800 feet above the surrounding 800 foot plateau. The Start/Finish for Reach the Peaks is at the park Visitor Center, about halfway up the mountain at about 1,700 feet, and all of the course is at this elevation and above. 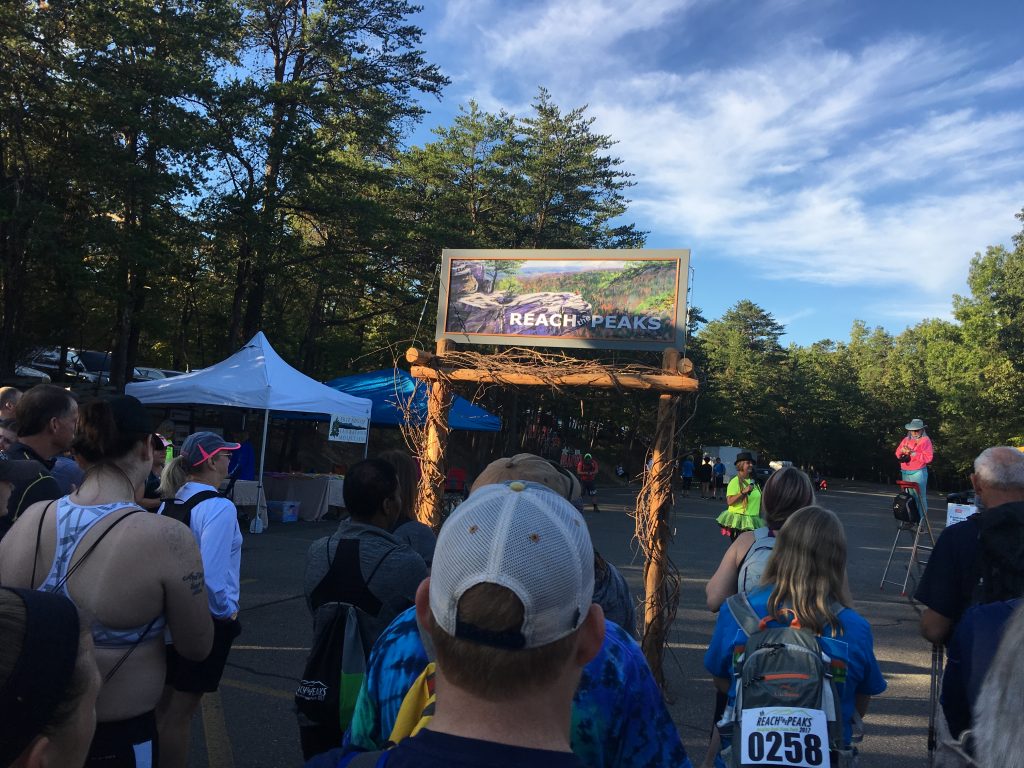 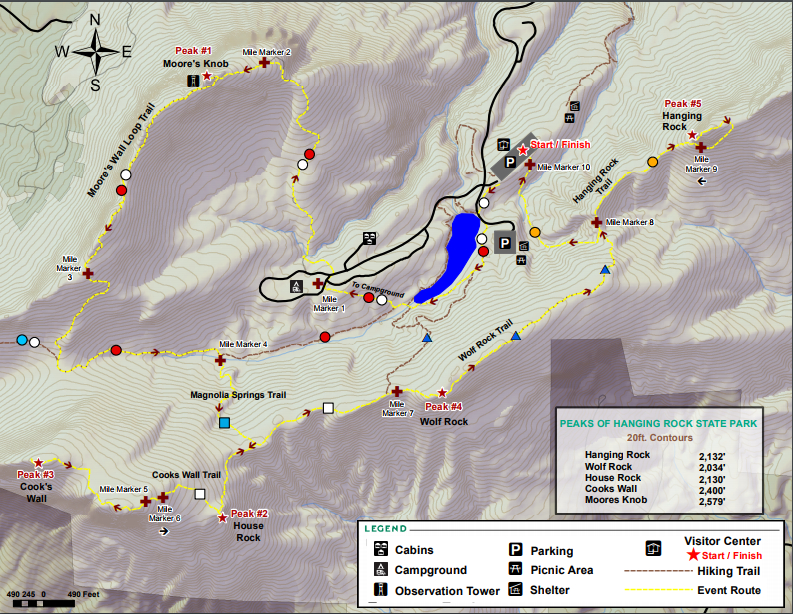 Reach the Peaks is Underway!

Mike started with about 100 other Reach the Peaks runners at 8:00AM. Hikers (about 500 of us) were started in staggered groups beginning at 8:30AM. There were probably 60-70 hikers in my first group; such groups were started at 10 minute intervals. The first mile was a mix of level and moderate uphill single-track, and all the hikers in the group were pretty bunched up. In the second mile, things become considerably more challenging, climbing from about 1800′ to 2600′ in just over one mile. This included a mix of steep, rocky, rooty single-track trail, and uneven stone stairs. The crowd spread out considerably. 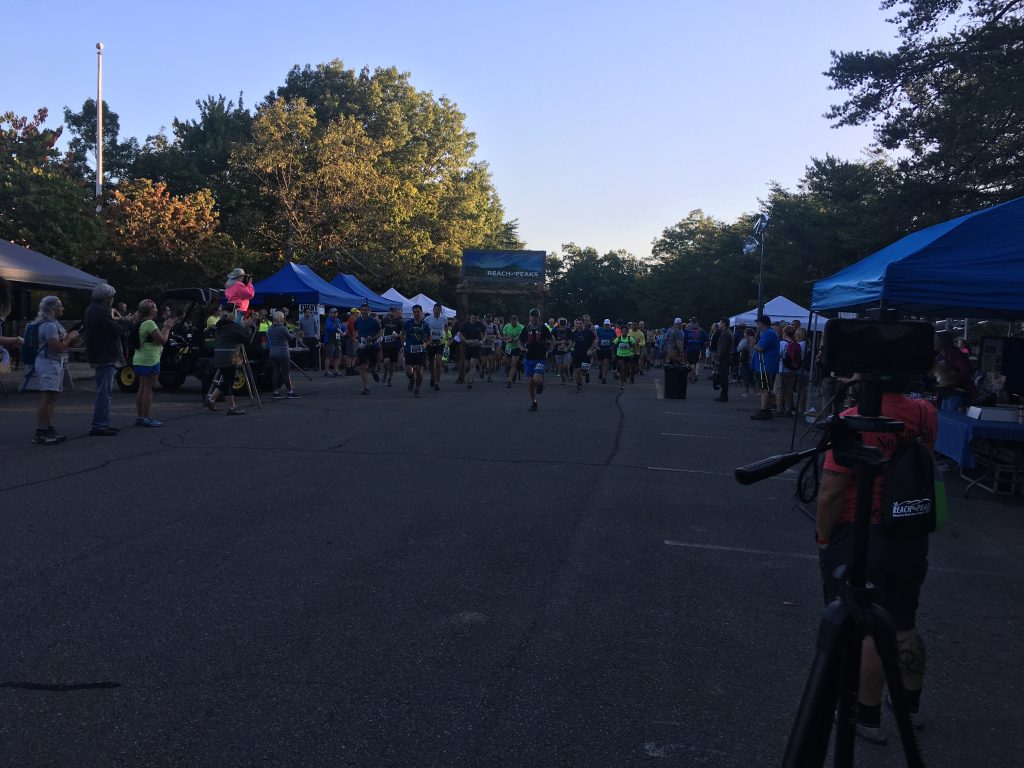 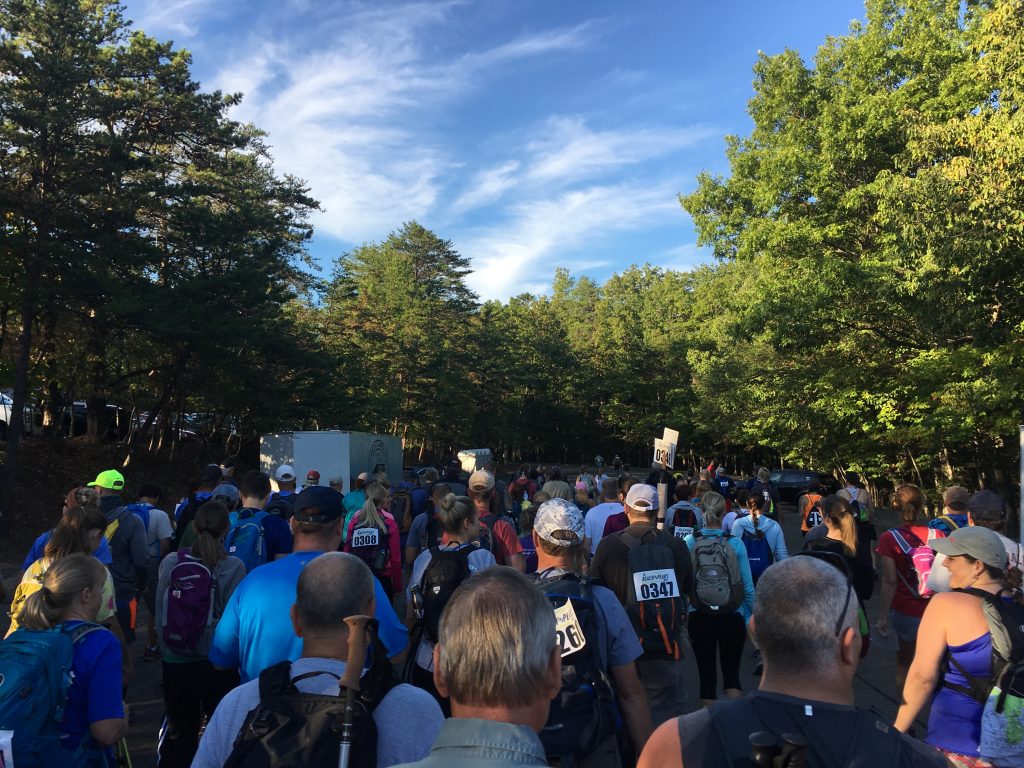 After about an hour, I reached the summit of Moore’s Knob, the first (and highest) of the five “peaks” we would assault that day.  In fact, Moore’s Knob is the highest peak in the Sauratowns. Upon arrival, volunteers marked each participant’s map with their time of arrival at that peak; this would serve as evidence of completion later, for your completion patch. Moore’s Knob has a raised observation platform, with spectacular 360 degree views of the surrounding countryside. It was a clear day, and I could easily see the tall buildings in downtown Winston Salem (about 22 miles away) and Greensboro (about 35 miles). I could see clearly to the horizon in every direction… thousands of square miles. 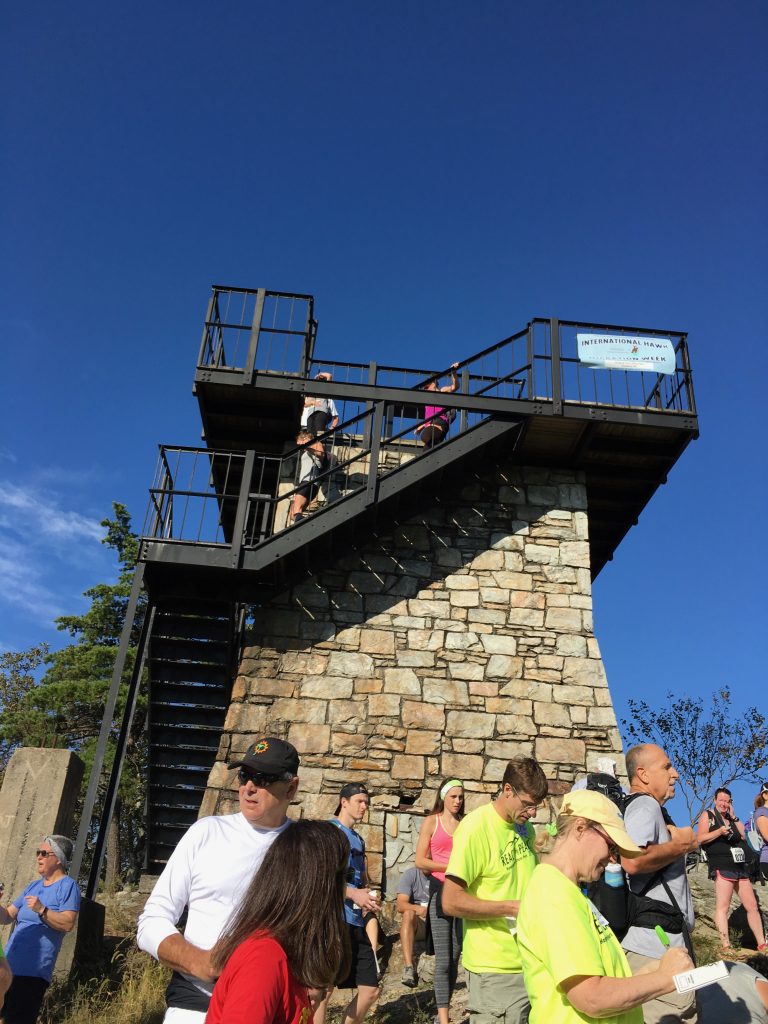 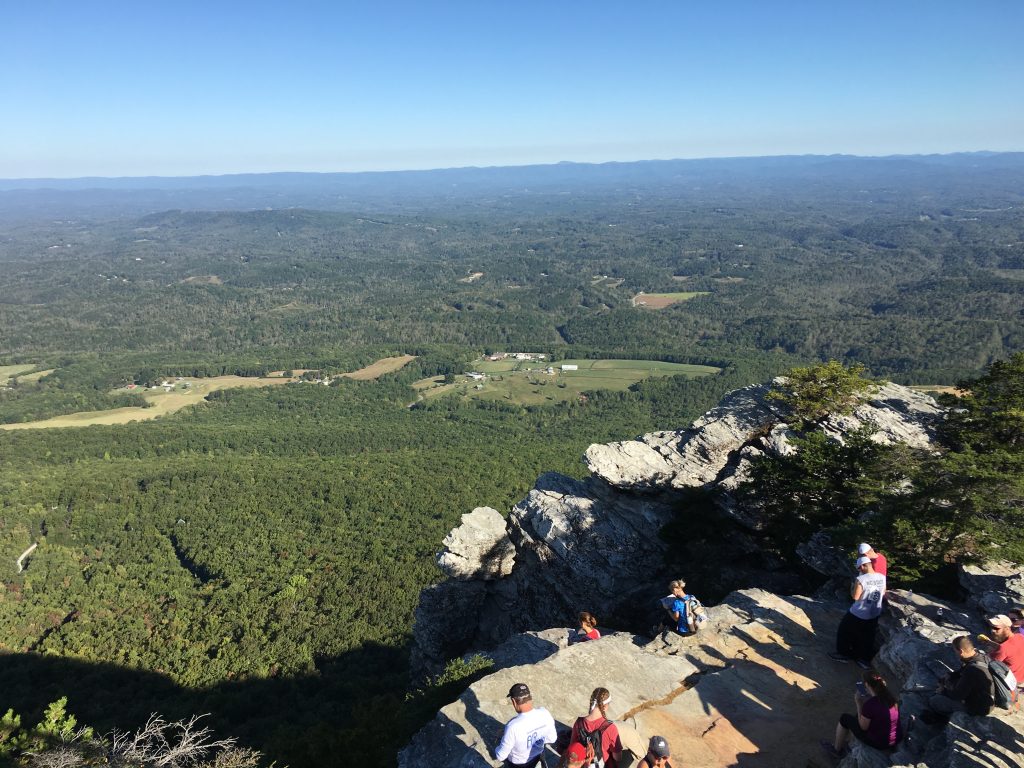 After a few minutes of rest, snack, and photos, I continued along the trail, and descended back down Moore’s Knob along a different trail. On average, this trail was a bit less steep (it lost 800 feet over about 1.75 miles), but the trail surface was considerably more rugged and rocky. Mike confirmed later that this was the scariest running surface of the day.

At mile four, and about 1750′, the trail began climbing again, and there was a water station. I started with a full 2.5L hydration bladder, and had plenty of water for the full distance. At about 4.5 miles, the course turned onto a spur trail toward the next two peaks. At mile 4.75 and 2100′ we reached the second peak, House Rock, and collected our second mark on our “dance card.” We continued up the trail, to Cook’s Wall at mile 5.5 and 2,400′, and another mark on the card. A little more rest, a little more snack, a few more pictures, and I was on my way. 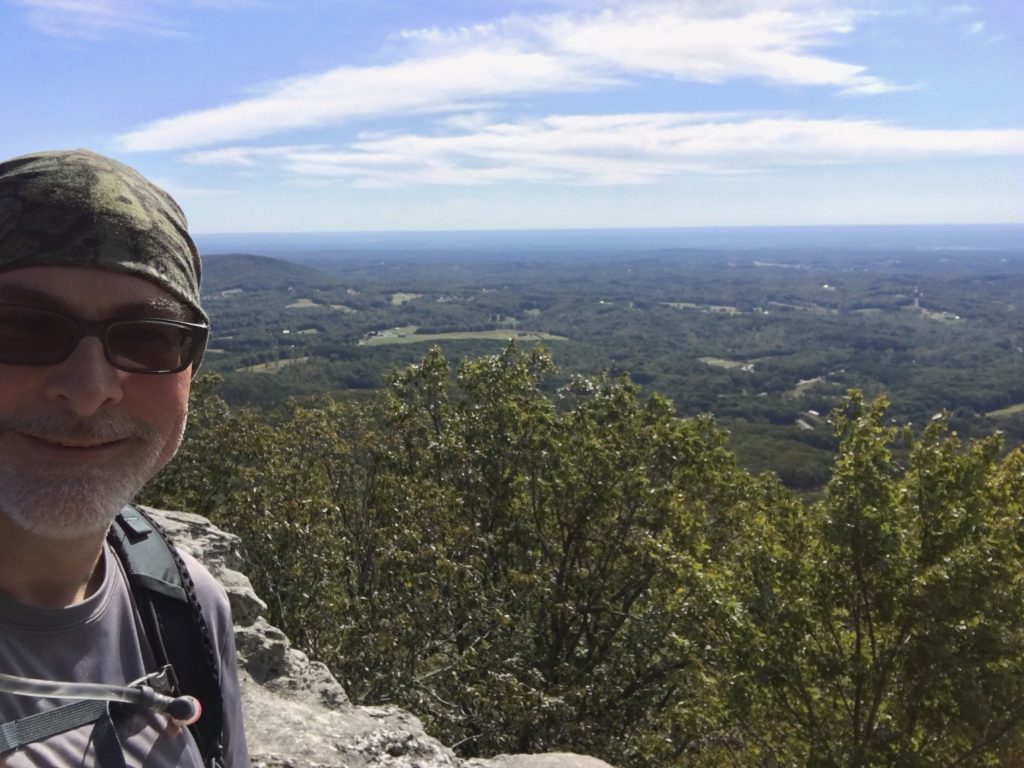 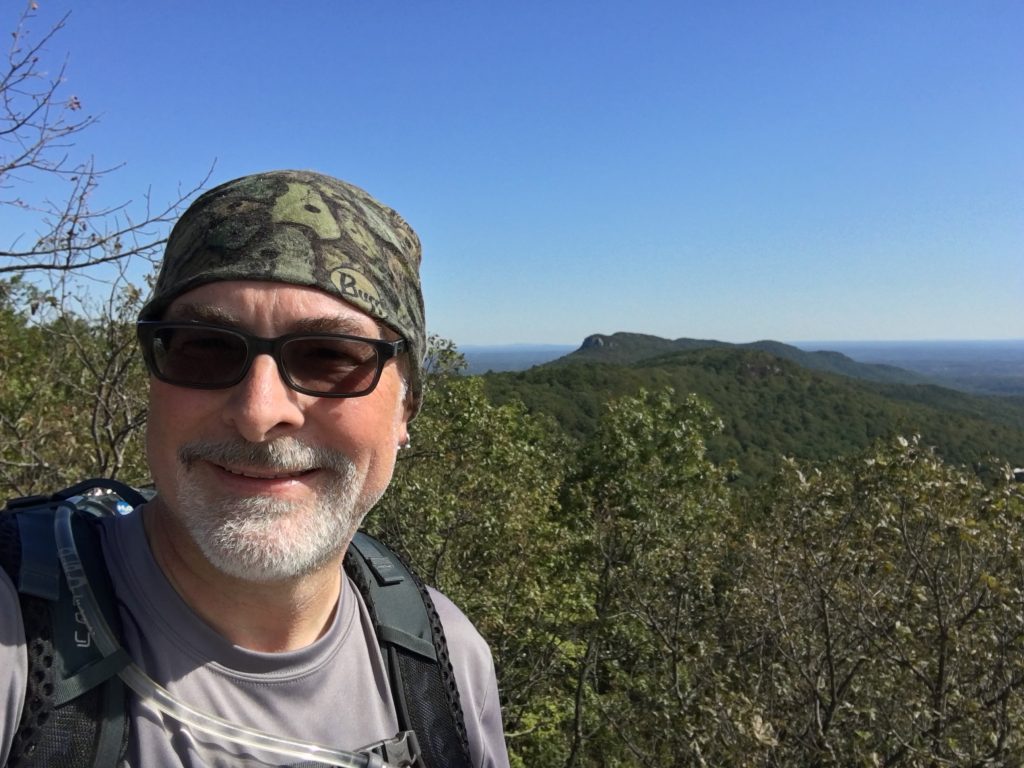 We now backtracked for about a mile along this spur trail, then continued along the 2000′ ridge toward the remaining peaks. Peak 4, Wolf Rock (at mile 7) shouldn’t really count as a “peak” as it’s just a rock outcropping along this 2000′ ridge. But that’s OK… I’m happy to have another mark on the card. Four down, one to go. Not much to see at Wolf Rock compared to the others… I didn’t even stop here, except for the mark.

Now the trail descends a bit, to about 1800′. There is another water station just before Mile 8, then you start up the spur trail toward peak 5, Hanging Rock. After a short, steep section of trail, things level out for a little while and lull you into a false sense of accomplishment. On the profile, this climb looks much smaller than the two larger climbs we’ve already done today. But the profile doesn’t tell the whole story of the Hanging Rock Climb. 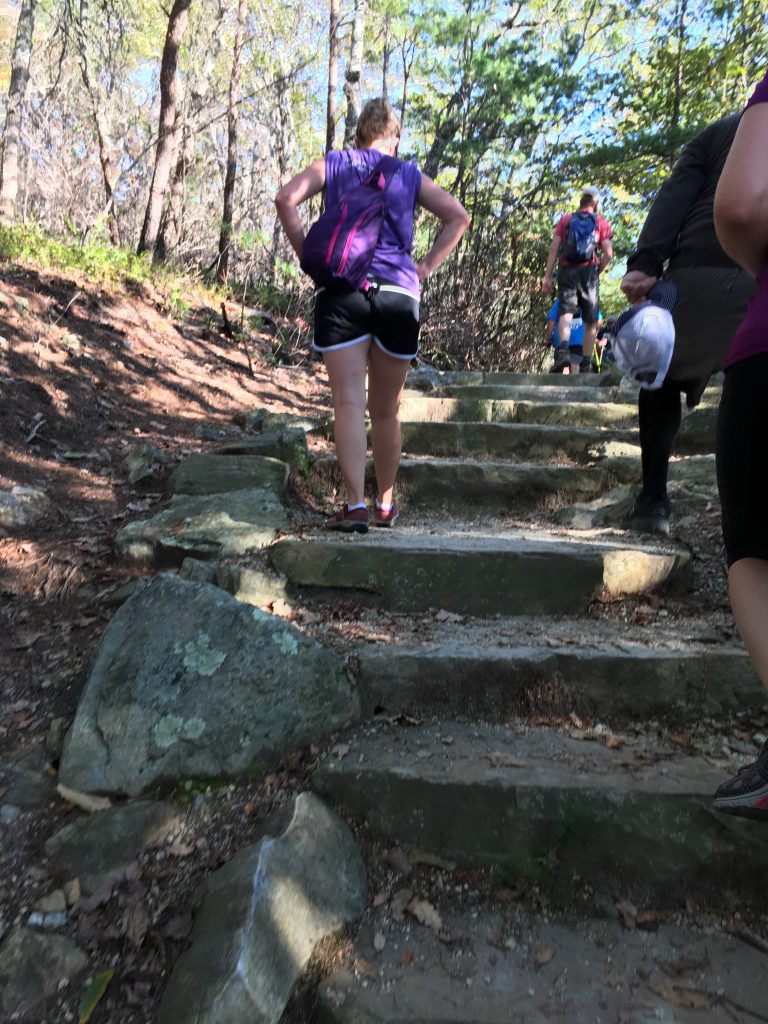 The trail climbs about 450′ over about half a mile of nearly-continuous, uneven stairs. With fresh legs, it would be tough. After 8 miles and about 1800′ of climbing so far, it’s brutal. Everyone slowed their pace considerably, and most folks stopped frequently to catch their breath. But after another half-hour of climbing, I reached Hanging Rock. 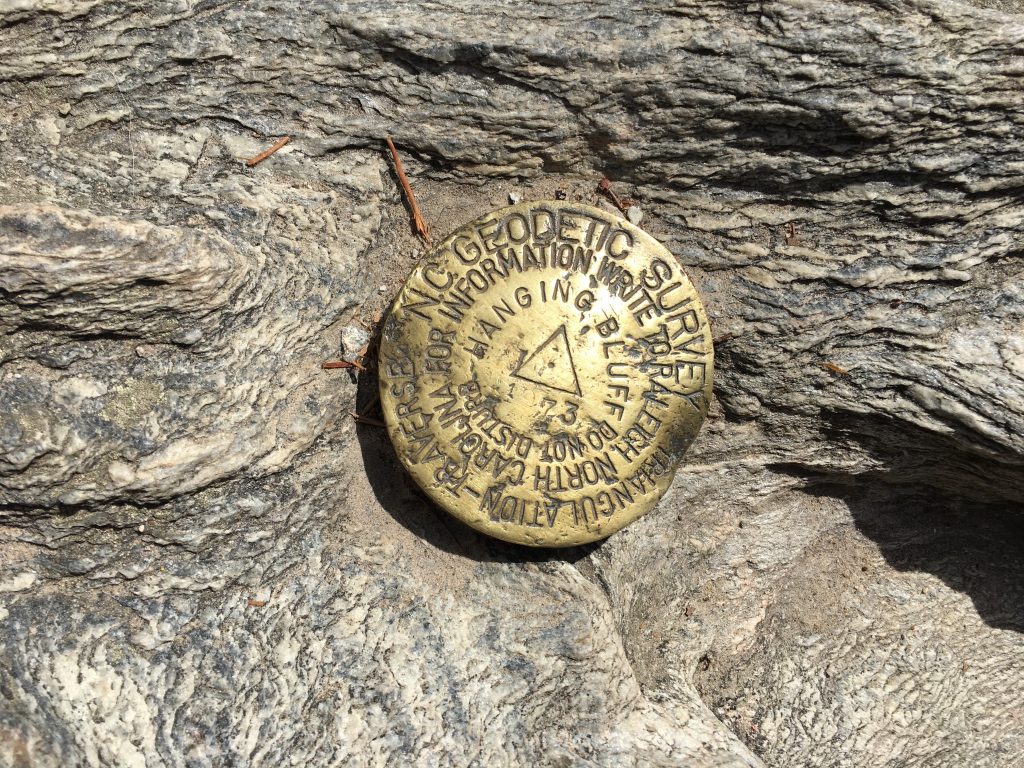 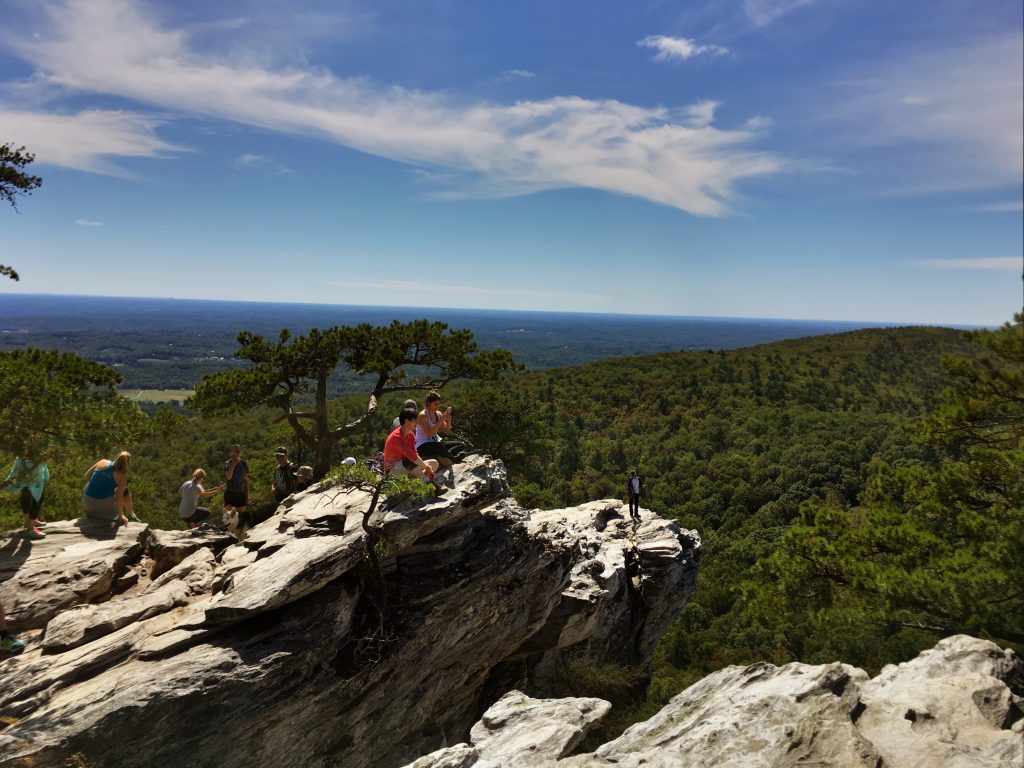 While Hanging Rock lacks the spectacular 360 degree view of Moore’s Knob, it’s still pretty fantastic. You can scramble way out onto the rocks, and get a great rush and a great view. After about half an hour of rest, snack, and pics, it was time to head down to the finish. 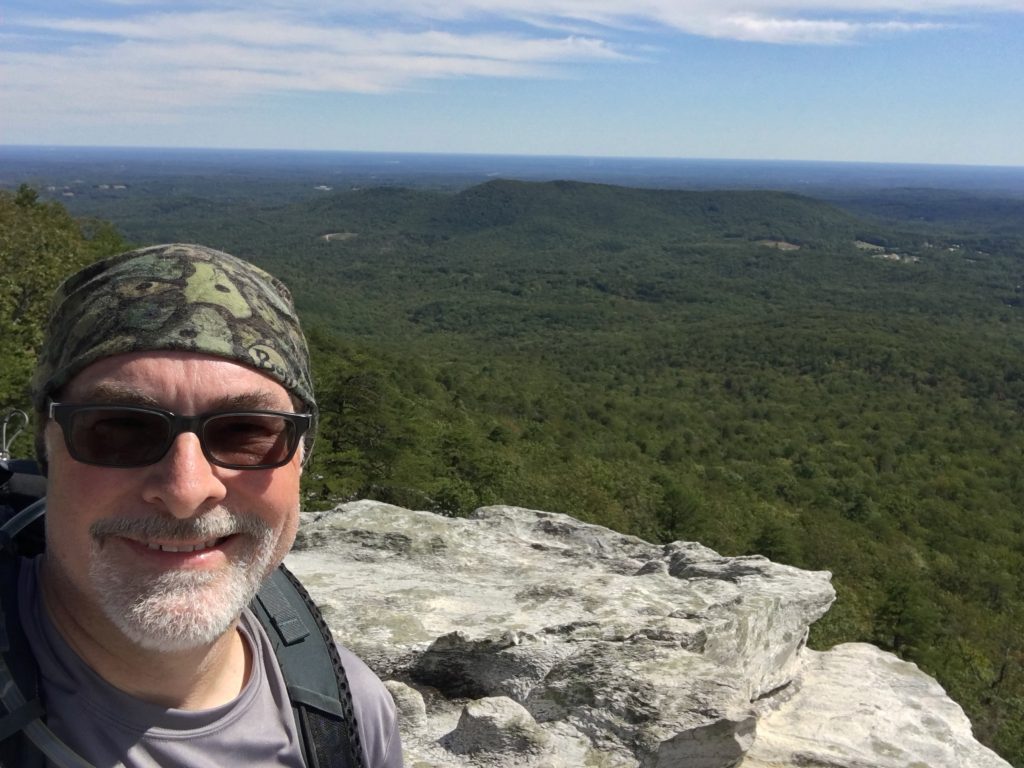 At about mile 7, my left knee was starting to give me some trouble; it didn’t want to bend properly when stepping down. Climbing wasn’t a problem, but every time there were steps down, I had to side-step, one step at a time.  And here, there were many hundred steps down. I let many people pass as I took my time down the stairs.

Finally, at about mile 9.25, things eased to a moderate downhill, and I could increase my pace. I made pretty good time over the last three-quarters of a mile, and finished in a jog, about 6 hours after starting. My Fitbit said my moving time was just over 4 hours. Not a bad pace, if you ignore the breaks! 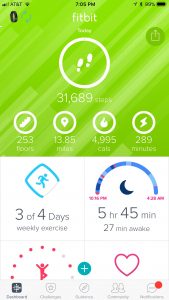 I am really impressed at how well organized the Reach the Peaks event was. Nice people, good swag, limitless snacks at the start, lunch at the finish. Volunteers were cheering along all the participants at every trail junction, every peak, and at the finish. The trail was well marked.

Physically, Reach the Peaks felt as hard as any day I backpacked in the Smokies, even with the lighter pack. At about 2300 feet of climbing, it was similar to many of the Smokies days in that regard. But my pace was much faster here, so that makes sense, I guess. 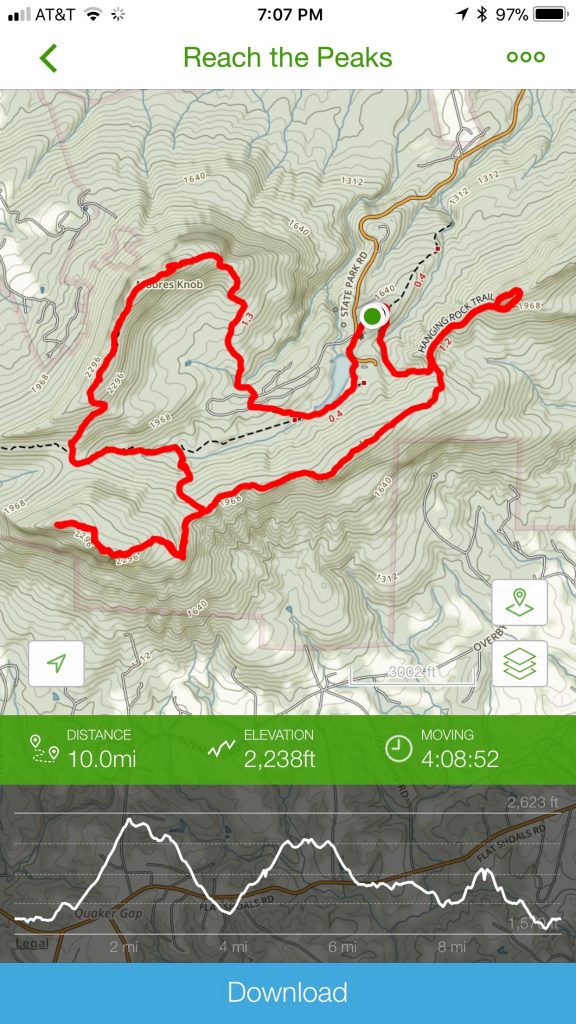 Even though this kinda kicked my butt, I suspect I’ll do it again next year… but I may try to moderate my pace a little better for the first few miles, now that I know how hard the final climb is.

Our wives drove up separately, and picked up Mike when he finished at 10:30, after a 2.5 hour run (a GREAT time!). The three of them visited local wineries while I finished my hike; I drove out and met them for the last couple of wineries. A great finish to a great day of hiking.

I really enjoyed Reach the Peaks, and recommend it for everyone… with enough training!